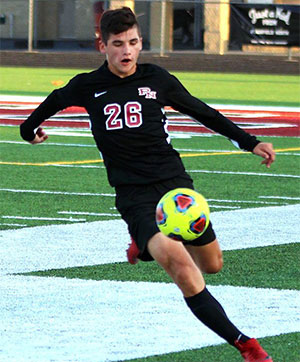 Ryan’s passion for soccer began at age 5 when he started playing in a recreational league near his Plainfield home. He went on to participate in travel soccer with a club in Plainfield, and was looking forward to playing defense his senior year of high school. Those plans were cut short when his knee started to become increasingly more painful after play, sometimes seizing up. Even though he thought it was tendonitis and got by with ice and ibuprofen, he knew he needed to see an orthopedic surgeon after a post-practice episode.

“I went to take a shower and as I lifted my knee over the bathtub, I felt my knee lock up and something get stuck in my knee,” the 18-year-old explains. “We found out later that it was a piece of bone and cartilage.”

Ryan visited his primary care physician, went for an MRI, and then was referred to an orthopedic surgeon who recommended osteochondritis dissecans (OCD) knee surgery, but delivered grim news. “He said that going into surgery I had a 60 percent success rate of my knee actually healing, and that if it didn’t heal, I’d have to get another surgery to fill this ‘pothole’ in my knee. My future of playing high impact sports after that second surgery was just not going to be. I wouldn’t be able to play competitive sports.”

The Value of a Second Opinion

Ryan said he couldn’t imagine a life of not being able to play soccer and other sports he enjoys, like basketball, for the rest of his life. The doctor had recommended swimming and biking, but neither of those things interested him.

“Thankfully we got the second opinion from Dr. Patel,” Ryan says. “My mom knew a coworker who is a P.E. teacher and Dr. Patel had done her complicated knee surgery. Our next door neighbor also has some severe knee complications and is going to have surgery with Dr. Patel.”

Upon meeting Dr. Patel, Ryan’s first impressions were that he was upbeat and confident. “He told me there was a 90 percent success rate on the surgery. He gave us such confidence, which made us feel 100 times better. I felt like this was a problem that could actually be resolved and I wouldn’t be stuck with this forever.”

Dr. Patel makes it his goal to deliver the highest quality of care by specializing in complex knee injury procedures. After meeting with Ryan and diagnosing him with osteochondritis dissecans (OCD), he discussed how he could fix the issue and answered all of Ryan’s questions.

“Patients who are educated can make the most informed decision possible.”
Ronak Patel, MD

“I’m a big believer in second opinions,” Dr. Patel says. “Even if people come to me for the first time, I tell them ‘I stand by every explanation I’m giving you, and I have no problem with you getting a second opinion.’”

Dr. Patel took his time during the consultation appointment with Ryan and his parents. “It’s all about patient education, which is so important,” Dr. Patel says. “My staff knew I was going to be in the room with them for 30-40 minutes. Patients who are educated can make the most informed decision possible.”

Ryan’s mom Carrie was very pleased with the explanation of the surgery and Dr. Patel’s positive outlook. More than relieved with the prognosis, Ryan’s family made the collective decision to schedule OCD knee surgery with Dr. Patel at an outpatient surgery center.

The Day Before OCD Knee Surgery

Ryan says he was given a lot of information the day before surgery – which was in February of 2021 – so he would know what to expect. Physician assistants and other staff prepared him for everything he needed to know regarding the surgery and what he could expect from knee surgery recovery.

OCD knee surgery falls under the category of cartilage surgery, according to Dr. Patel, who performs more than 50 of these specialized procedures annually. He pinned Ryan’s bone – the left medial femoral condyle – back into place from where it had broken off, and grafted in millimeters of new bone from another part of his knee to ensure there was no longer a ‘pothole’ in his knee.

Holes were drilled into the bone to increase blood flow, and Ryan’s cartilage was pinned into place using absorbable screws. Dr. Patel likes to use the analogy of good soil for good grass growth to explain it. If you don’t have good, prepared soil (bone), then the grass seed (cartilage) won’t grow well.

“Ryan’s cartilage died, but his problem was not the cartilage,” Dr. Patel explains. “His bone had problems. If we don’t treat the bone, anything on top is not going to survive.”

Ryan left the hospital the same day of surgery and had to stay off of his knee for six weeks. He wore a knee brace, and supported himself with crutches. Five days after surgery, he started physical therapy that helped with bending and flexibility. Electrical stimulation (E-stim) therapy was started, and he performed stretches for his hamstrings and calves. After six weeks, he graduated to weight-bearing activities and walking again without crutches. At 12 weeks post surgery, Ryan was able to walk a mile.

A recent summer trip to Disney World proved he was feeling pretty good. He averaged 20,000 steps a day.

At his six-month follow-up visit with Dr. Patel, Ryan got great news. The muscles surrounding his knee looked to be functioning at 80 to 90 percent. With continued exercises, full strength will return soon. Ryan says he couldn’t be happier with the results of his knee surgery. “I’m really thankful for Dr. Patel. I have no pain in my knee, and I’m just working to get my strength back.”

“With Ryan, you could tell he was somebody who was motivated,” Dr. Patel adds. “It was never a question of whether or not he was going to put in the time with physical therapy. We knew he had great family support with mom and dad.”

Now a college student at Illinois State University, Ryan says his academics are his priority. However, in a month or two, he plans to participate in recreational soccer and basketball. He can already tell what the return-to-play benefits will be like. “I won’t be having pain and it won’t hinder my performance,” he says. “After taking a break, it won’t tighten up, and for sure with basketball, I’ll be able to jump better on my left leg when I’m exploding to the rim. I look forward to it a lot.”

Get Expert Knee Care at IBJI

Whether you need to schedule an initial consultation, want a second opinion, or need to schedule a surgical procedure, you can make an appointment today with Dr. Patel—online or in-person—to learn more about treatment options that will get you back to feeling your best.